Rep. Tulsi Gabbard (D-Hawaii) announced Sunday that she is stepping down from her position as a vice chairwoman of the Democratic National Committee, in order to endorse presidential candidate Bernie Sanders. Gabbard appeared on NBC’s Meet The Press Sunday morning, where host Chuck Todd noted that she “has been at odds with her boss, DNC […] 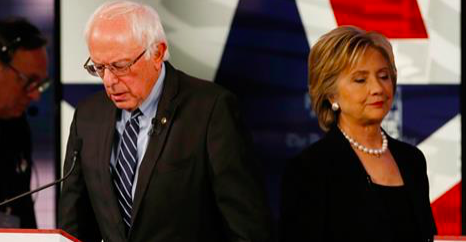 The Democratic primary race appeared to be incredibly close during the Iowa caucus Monday night, where candidate Hillary Clinton won at least six precincts by way of a coin toss. While the caucus numbers led former Maryland Gov. Martin O’Malley to drop out of the race, it left Clinton and Vermont Sen. Bernie Sanders in […]

During the fourth Democratic Debate Sunday night, Vermont Sen. Bernie Sanders criticized the overthrow of Saddam Hussein in Iraq, while pledging his support for the proposed overthrow of Bashar al-Assad in Syria. Sanders, a self-declared socialist, has been adamant in the past about the fact that he opposes—and did not vote for—the war in Iraq. […]