(TFTP) Less than one week after publicly reprimanding Qatar, President Trump appears to have changed his tune, as he signed off on the sale of $12 billion in weapons to the country he referred to as a “funder of terrorism.” This move, in Trump’s own stance, makes him a de facto funder of terrorism now. Qatari […] 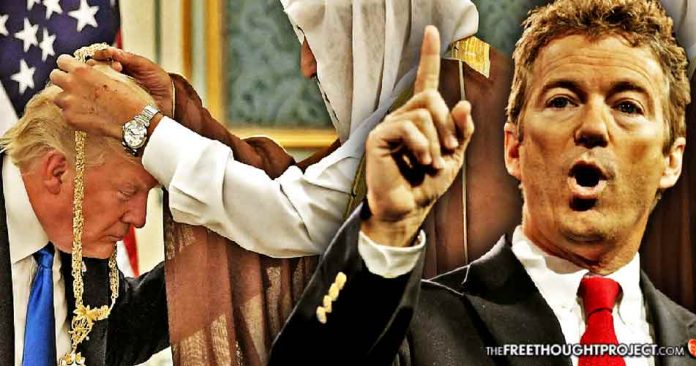 (TFTP) While the double standards the United States sets for its close ally, Saudi Arabia, have been criticized by members of the public, it is not often that politicians call out the hypocrisy—and then there’s Rand Paul—the man, who on Wednesday, was dodging .556 rounds fired at him by an anti-Trump lunatic. The Republican […]

The United States has given a medal to a major terrorist state… for its efforts to fight terrorism. Newly appointed CIA Director Micheal Pompeo awarded Saudi Crown Prince Mohammed bin Nayef with the prestigious “George Tenet Medal” on Friday, for his “work in the fight against terrorism.” Wait, what?!  This all comes as President Trump is reportedly […]